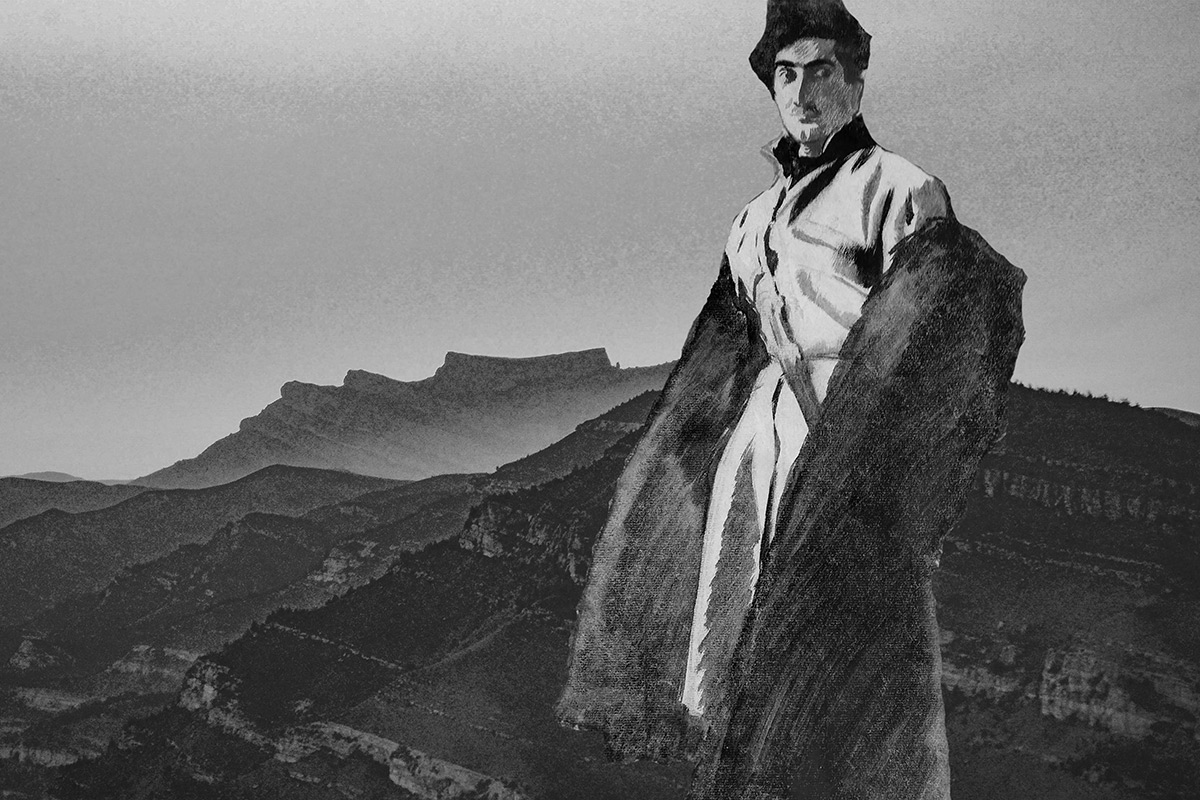 22-year-old artist from Dagestan, Khalil Musaev, who was educated at the Tiflis college and the Munich Academy of Arts, had his first personal exhibition. Why did the premiere take place not in his homeland in Temir-Khan-Shura, where the artist lived and worked, but in Vladikavkaz? Where did this exhibition take place and what was shown there? Who helped in its organization, and what connected Khalil Musaev with Vladikavkaz? There is no answer to all these questions. The only newspaper article briefly reports only about the fact of this event, and though the existence of the author of the publication and the newspaper itself are questioned by researchers.

This fact could be deleted from the artist's biography unless there was another "document" – the novel by the writer Yuri Slezkin "Table Mountain" in 1922, one of the main characters of which, under his own name, was the young artist Khalil Musaev. The plot of the novel does not say anything about the exhibition, but there is an episode about the short, but complex and contradictory life of the Artist in Vladikavkaz at the foot of Table Mountain.

The Kamliy (exile) project is an attempt to compose a version of this mysterious event and the young artist's personal inner experiences through historical and artistic research and contemporary art. Project "Kamliy" is the album consisting of "artist's works" with which he arrived in Vladikavkaz at the end of 1919 and which he soon left thinking and agonizing about his future; sketches of "sites" of his Vladikavkaz route; diary entries reflecting the artist's inner dialogue with himself and the poster of a "non-existent" exhibition.

"Table Mountain" in the project appears not as a geographical object or a point on the map, but as a literary work - the only source indicating the fact of the artist's stay in Vladikavkaz. Vladikavkaz became, as we think, the first attempt of emigration, in which the artist stayed for a very short time, later returning to Dagestan. But it was this trip, the life in the city, communication with people like him – lost and abandoned at the foot of a large mountain, so clearly reminiscent of his native Saddle Mountain – that determined his fate.

The Saddle-mountain raised the young man, put into him all the most important things that a highlander should have. At the foot of Table Mountain, the Artist painfully reflected on his fate, clearly realizing his "qismat-kamliy". The echo is strong in the mountains. The voices of those shouting can be heard at a great distance. Communication takes place from the heights of two mountains - Saddle Mountain and Table Mountain that became the background for his portrait, made by Eugene Lansere in 1921 in Tiflis. This is the exact state of Khalil Musaev when he leaves Chokh, Dagestan, and Russia forever. In the meantime, the young artist is engaged in an internal dialogue, tormented by the choice before him - to stay (return) or leave forever. Answers in the dialogue are quotes from Y. Slezkin's book "Table Mountain" (1925)*, the questions, naturally, arose from the content of the answers.

Project “Kamliy” is a fictional story that could be told differently. Two pictorial series, combined with "dialogue", recreate a possible picture of events – an exhibition, a stay in the city, a circle of acquaintances and interests. Most likely, Khalil Musaev went to Vladikavkaz not just to have a walk, but to make an attempt to move further to Tiflis and then cross the Black Sea to Europe. That is why he carried all his work with him. From Yu. Slezkin's book, we know about many representatives of the Russian intelligentsia who lived closely and communicated a lot with each other in Vladikavkaz. Perhaps it was in this atmosphere that the idea of ​​his exhibition was born. Roughly understanding what kind of works could be at the Vladikavkaz exhibition (many have survived only in reproductions), I offered the 3rd year students of the Dagestan Art School named after M. Dzhemala to work with the works of this period and create their free but recognizable copies. The Vladikavkaz folder contains 14 works: genre sketches, portraits in the form of light sketches, which very accurately recreate the spirit and mood of the author. These young artists, as well as new participants from Vladikavkaz and Dagestan who joined them, imbued with the artist's history, stories and a city tour, created a surprisingly subtle and atmospheric graphic portrait of Vladikavkaz, where the artist lived in. 22 objects of Musaev's Vladikavkaz route - houses where he could stay, the buildings where the exhibition could take place, the streets along which he wandered, the river by which he dreamed, the mountain by which he yearned. In the album, the artist's "paintings" are interspersed with sketches - "addresses" - the Semyonov-Taho-Godi house, the Hamid Dalgat house, Bulgakov's house, the Terek embankment, the Sunni mosque, the Guzunovs' house, Slezkin's house, Tuganov's workshop, Tersky museum, the avenue, Table Mountain...

* The writer Yuri Slezkin, who lived in Vladikavkaz in 1919-1920, not only personally knew KM, but their fathers fought together at Kars, in the Russian-Turkish war. The writer wrote a book about the time and the city that for some time turned into a kind of Babylon of confused and lost souls, a trap for the Russian intelligentsia, whose obsessive state were painful thoughts about themselves, their fate and homeland, their endless, internal dialogue encouraged some to drama and despondency, and others to act.